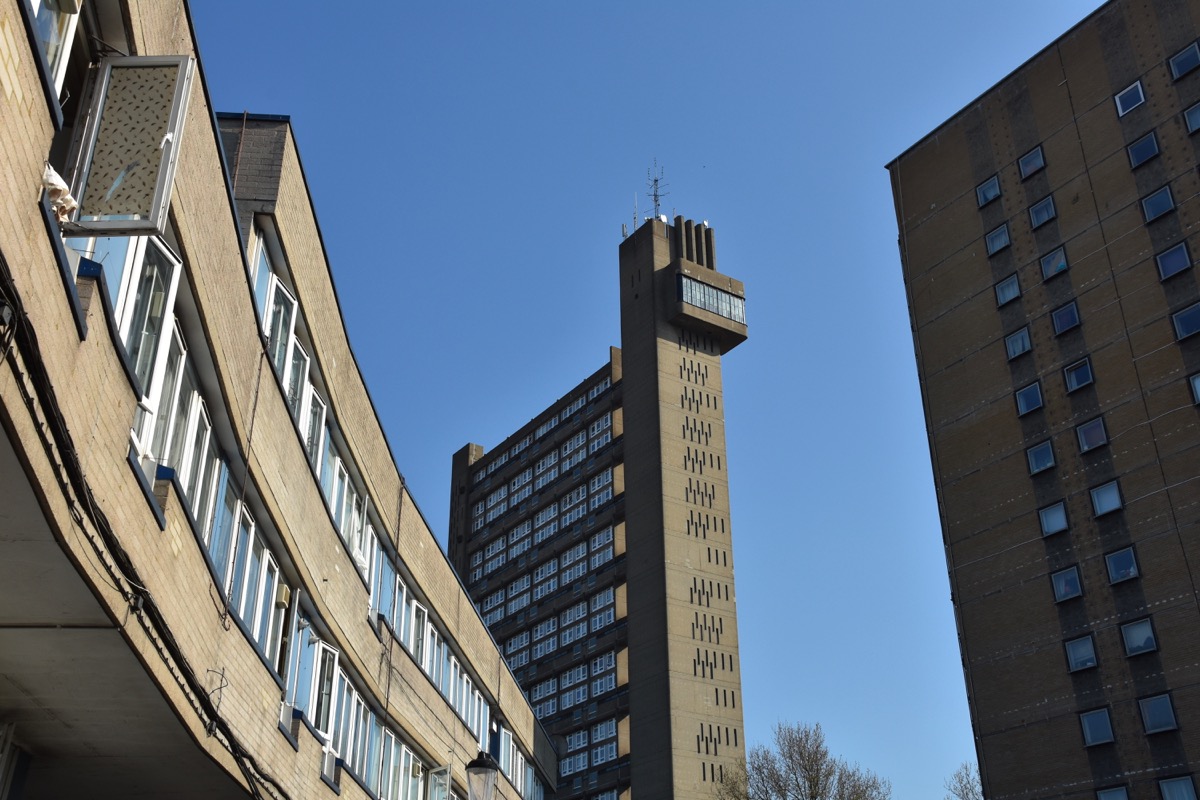 Trellick Tower now it’s quite an iconic place. But the road to this status was long and bumpy, and building’s creation was at first considered in the terms of ‘blame’. The tower ripped the landscape of North West London, ruined the reputation of its architect, and finally became trendy.

This 98m high building located in Notting Hill is one of the flag projects by Hungarian-born architect Ernő Goldfinger who came to London in 1934. A housing crisis after II World War gave him a chance to put through his idea of “the monumental sense of weight and texture of concrete.”1  At the time London County Council was determined to replace destroyed, sub-standard late 19th-century housing. He proposed a project of a massive, 31-story slab block with 217 flats. Earlier a similar Goldfinger’s project was approved in SE London – 27-story Balfron Tower.2  The concept of Terrlick Tower was a realisation of modernist assumptions of “housing Europe’s teeming urban masses in high-rise blocks, thus securing sun, space, and greenery.”3  As James Dunnett, an architect who worked in Goldfinger’s Office put it: “One has a feeling that this is Stalin’s architecture as it should have been”.4   The project was accepted in 1966, the building was completed in 1972.

We didn’t have any security guards, and everything that you can imagine was in this building, including lots of drugs

In 70. brutalism started to “fall out of favour”, and the reception of the building wasn’t enthusiastic.5 Trellick exterior was seen as a “rejection of the English picturesque tradition.” Some said that enclosed walkways and a block itself resembled the “bridge of a warship, others said a Cyclopean eye, others said a mutant fridge.” In 70. and early 80. the estate started to erode, technical problems arose, the building was flooded with breakdowns.

“When I came here, I met a lot of friends from the islands. I met them inside Trellick Tower” – said one of the first-wave residents. Many of them were immigrants. Conditions they happened to live in weren’t the most comfortable. At the beginning there was no running water and residents were forced to use a standpipe outside the building. “We didn’t have any security guards, and everything that you can imagine was in this building, including lots of drugs” – residents claimed.6

The tower became nicknamed “The Tower of Terror” and some residents attempted to be re-housed.

The crime rate has increased and social problems of residents multiplied. Some terrifying events also happened: a pensioner was forced to use the stairs as the lift was out of order and he died; a 27-year-old woman was dragged from one of the lifts and raped; a man died after jumping off the top of Trellick Tower when his parachute failed to open. The tower became nicknamed “The Tower of Terror” and some residents attempted to be re-housed.7

Although his reputation was severely damaged and career was ruined  because of fuss around the tower, Goldfinger continued to defend his project “as a work of pure geometry, of beauty, a perfect resolution of horizontal and vertical elements.” And somehow this project actually was ahead of his era. The design assumptions were accurate and innovative. Only years later Goldfinger’s ethos will  be considered moral due to „the detailed consideration of the environmental conditions conducive to human welfare.” He had also extraordinary attention to detail ( “balconies with cedar cladding, architectural light switches mounted in metal door frames, double-glazed windows in a wooden frame that rotate outside to facilitate cleaning, space-saving sliding doors, natural light, sunsets”).8  Goldfinger died in 1987.

The social situation in the tower started to change in the 80. In 1984, a new association of residents started to operate. They initiated petitions to local authorities regarding security issues. Already in 1986, the policy on the rental of apartments changed: they were allocated only to those who wanted to live in the Trellick Tower.

In 1988 the London Daily News proclaimed Trellick “frightening, but now fashionable.” In the late 80s and early 90s, people began to buy more apartments privately.9   Hitherto residents were surprised when suddenly found themselves in some of Britain’s most sought after flats. £ 1.26 million has been invested in infrastructure improvements, monitoring, and building’s surrounding (e.g. playgrounds). In 1994, 24-hour security was employed. Crime and vandalism plummeted.

Also, the social perception of the building started to change. Some architects were efficiently lobbying to appreciate these Goldfinger’s ideas. In 1998 Trellick was made a listed building. Now it’s at its heights and it has become a pop-culture icon. The tower inspired writers, it appeared in several music videos, tv shows, tv adverts and even appeared on T-shirts. It can be seen in many films including Shopping (1994), For Queen and Country (1988), London Kills Me (1991,), Never Let Me Go (2010). Lately, the tower served as the location of game developer Colin Ritman’s apartment in the Black Mirror interactive episode/film Bandersnatch (2018).10 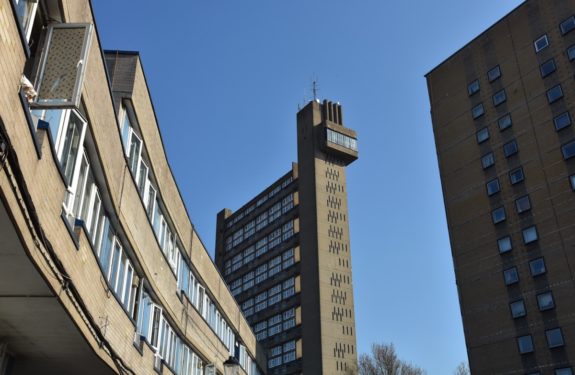 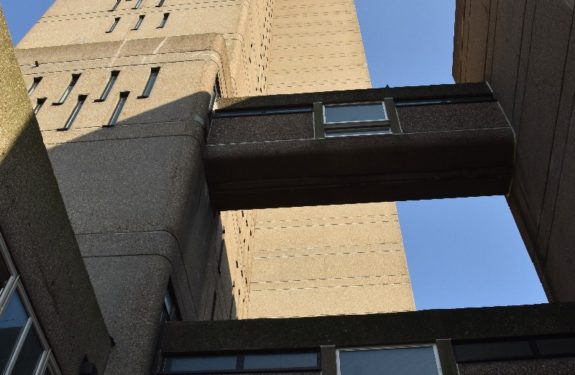 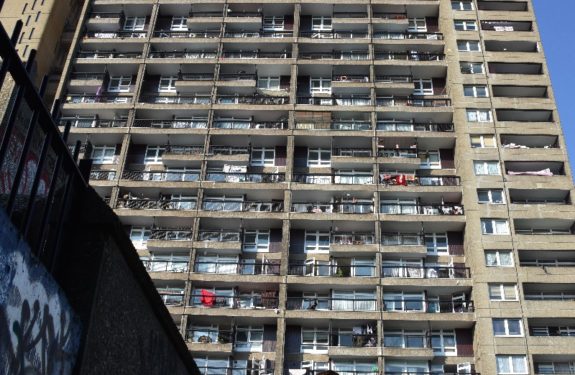 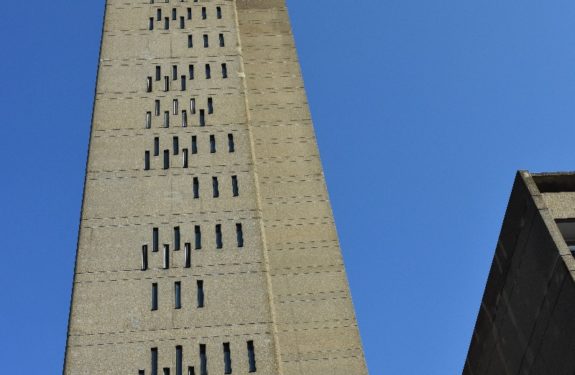 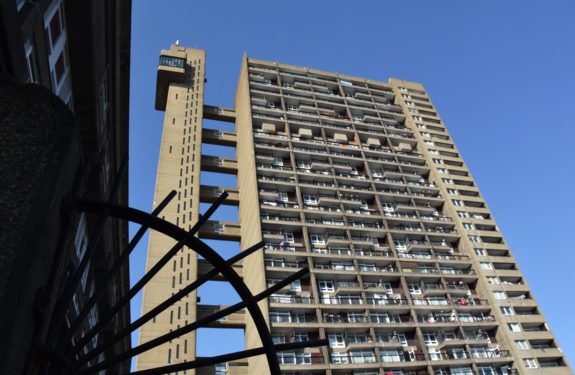 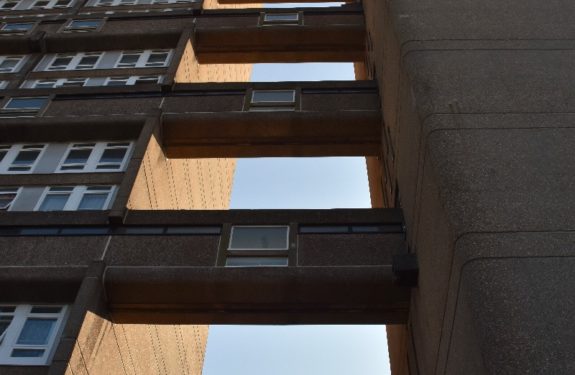 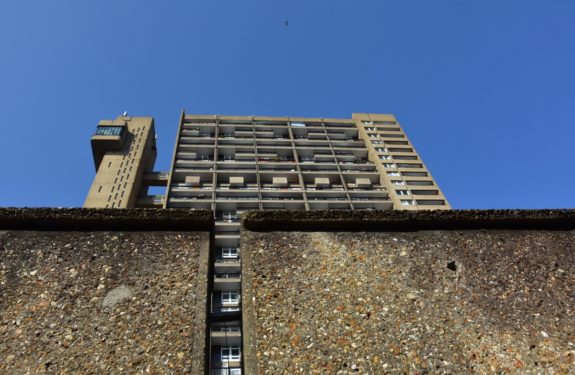 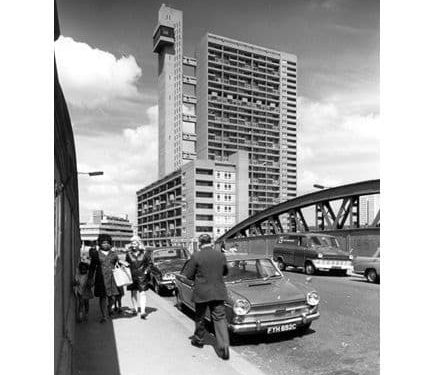 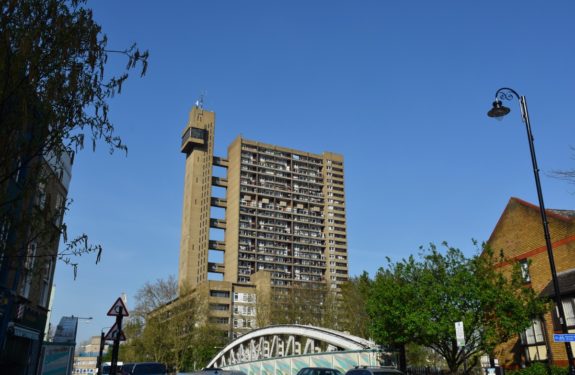 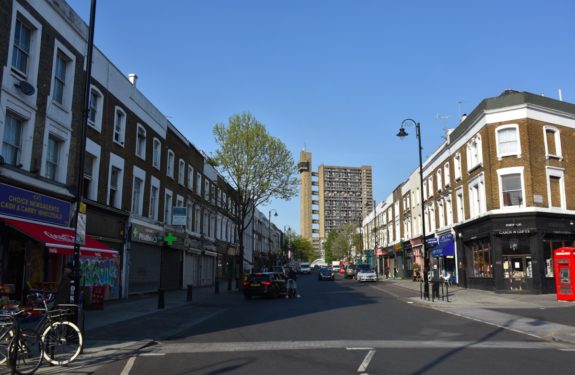 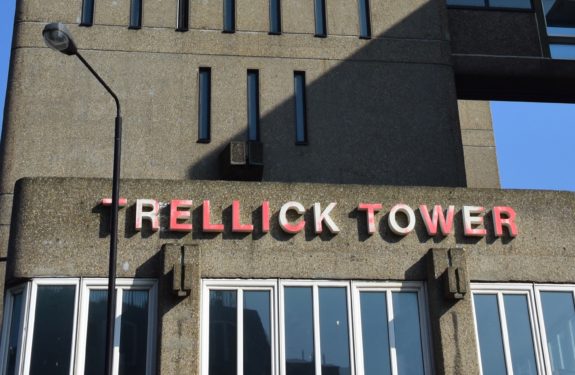 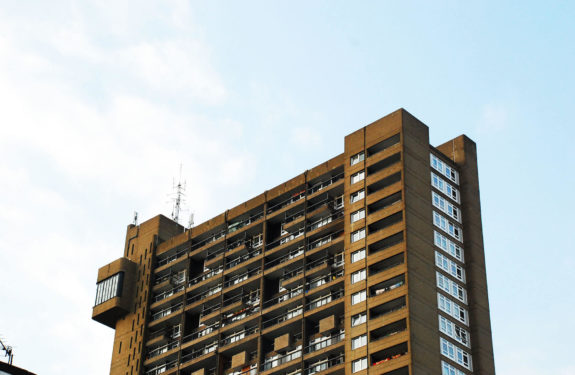 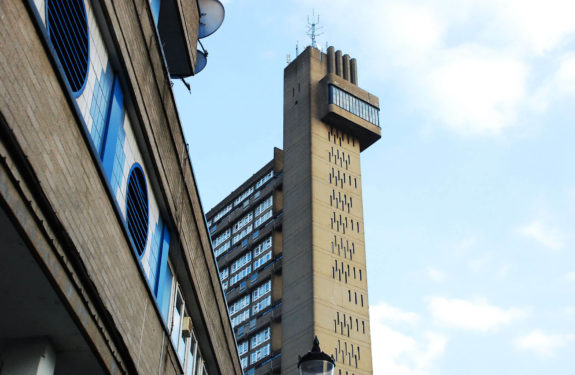 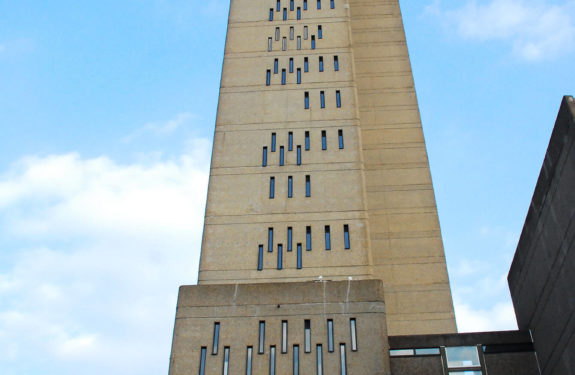 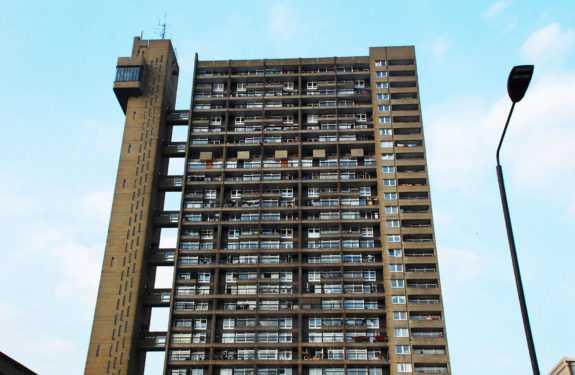 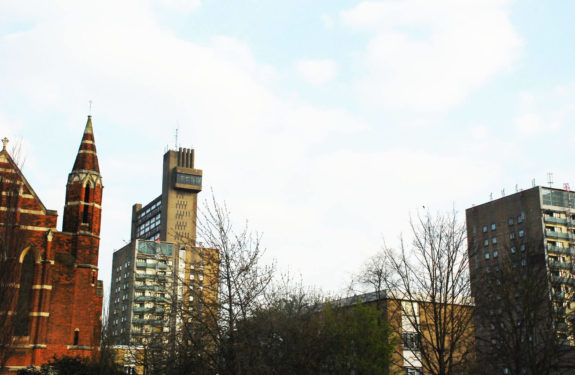 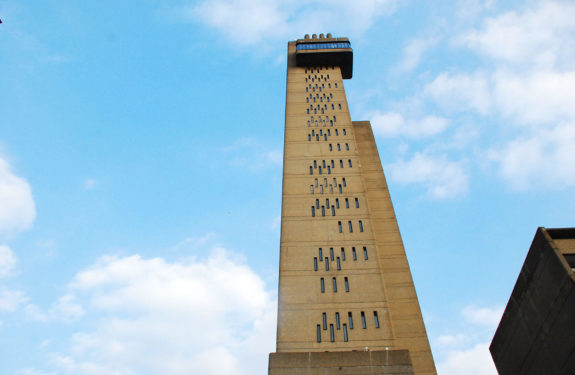 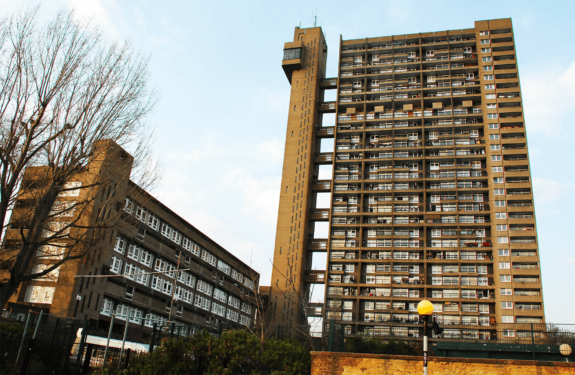 All photos by Eliza Kania